Meet Willa. She's my frolleague. Friend + colleague = frolleague. And a very sweet one at that.

Willa is holding something I've been loving lately and which she introduced me to... Korean tea.

Don't know what that is? That's okay, I didn't either until recently. 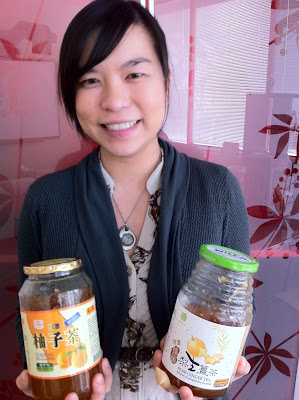 Korean tea is definitely not your Orange Pekoe.  It's a thick, marmalade-like syrup and is considered a tisane. The idea is to mix a few tablespoons into a cup of hot water. Easy peasy and delish! 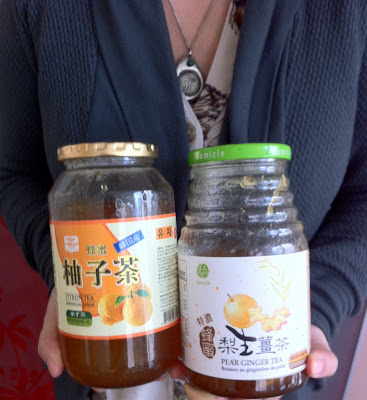 On the left is citron and on the right, pear ginger. In Korean: yujacha and saenggang cha (cha meaning tea).

And no, citron is not a fancy-schmancy way of saying citrus - which is what I thought at first. Heh. It's actually a tangerine-sized citrus fruit found in east Asia.  It's also called yuzu, or yuja in Korean, hence the name of the tea, yujacha. I love learning about new fruits. 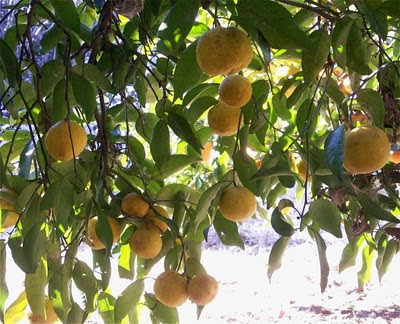 Yuzu isn't usually eaten whole because it's quite sour. Instead, it's used like a lemon and
can be found as juice, vinegar, paste, powder (dehydrated rind) and of course, as Korean tea.

While reading about yuzu, I learned that during winter solstice in Japan, people throw in a bunch of whole yuzu into the bath so it releases its lovely aroma, which in turn, is believed to bring about a sense of wellbeing. I just love the Japanese. What a super idea! Got extra lemons in the house? Throw them into your bath peeps! 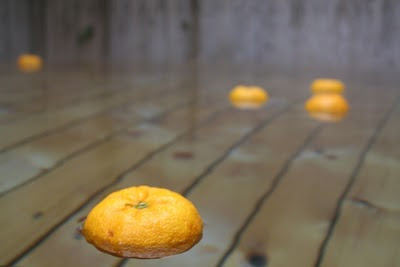 And I'm not sure if you noticed but my frolleague has the cutest lil' baby bump hidden underneath that awesome Anthropologie Southward Stop Dress she's wearing. Yes, she's with child! Yay! :)

Lately, Willa's been really digging the pear ginger tea, because it eases, as she calls it, her "morning, afternoon and evening sickness."  Poor lady.

Y'know, Willa isn't just cute, in the pudding club and my frolleague. The girl is also really flippin' talented.

Check out her knit veggies. The eggplant rocks my world. 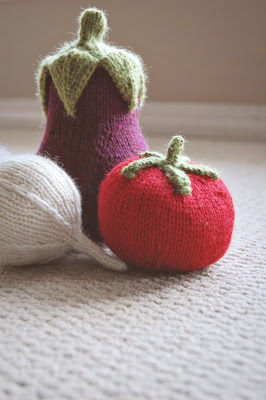 Wanna read more about Willa and her crafty skills? Take a gander at her blog, the disheveled designer.

Happy cha time, friends! Hope you're having a lovely weekend!

Dajana
Posted by dajana, all kinds of lovely