the ultrasound results are in! we're having... 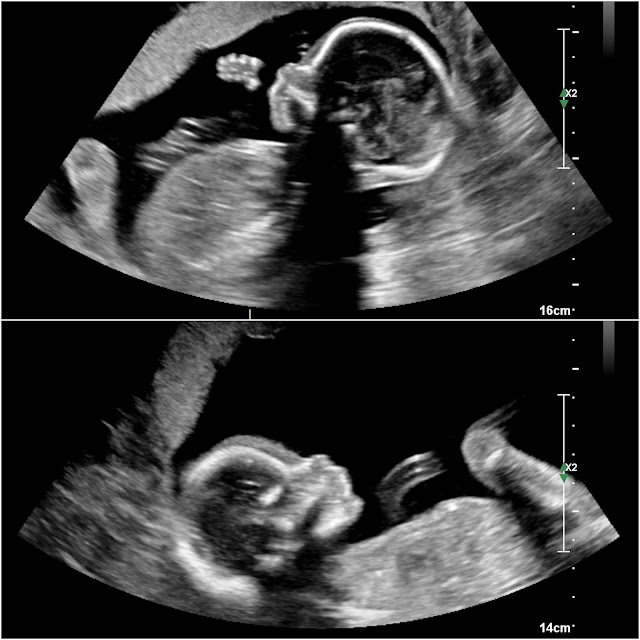 Yesterday we met our family at Jumbo for dim sum and over shrimp rice rolls and ginger beef dumplings, Scotty opened the envelope from our ultrasound technician (which had been sitting on our fridge taunting us for well over a week) to reveal we're having boys! BOYS. <3

There were joyful tears from our mamas and the biggest smile on my dad's face. He wanted to rush home to call his family in Croatia to tell them the news. Scott was beaming while my brothers were probably thinking, "Oh lordy, our sister's going to have two more guys to boss around for life." Haha. Jokes aside, the excitement was palpable! Side note: dim sum is a fantastic place to share fun news like this. No one noticed our raucous laughter and we could be our wacky selves without getting the evil side eye.

In addition to being excited, I also spent most of yesterday feeling a bit overwhelmed and in shock. I needed time to sit with the news. Had I harboured a secret longing for one of the twins to be a girl? Yes, I had. And I felt incredibly guilty for feeling that way. It would've been nice to have one of each, but I also know that when these two babies are placed in my arms I won't care about anything other than loving them and being the best mama.

For the past five months, we've been referring to these two as the babies and now that I know they're boys, it makes this pregnancy feel even more real. There's no way around it, I'm going to be the mama of two boys early next year. Eeek! In fact, I've already named them because I had an inkling they'd be boys, now I just need Scott's final approval (we have, um, quite differing tastes when it comes to names).

Are you the mama of boys? Or even twin boys? I'd love to hear your thoughts on parenting boys.

P.S. Loved this post from blogger Joanna Goddard on having a boy. It's as if she plucked the thoughts directly from my head. Judging by the near 600 comments, many expecting women have felt the exact same way I have. Here's to being honest about our feelings!
Posted by dajana, all kinds of lovely

Email ThisBlogThis!Share to TwitterShare to FacebookShare to Pinterest
Labels: Pregnancy